The FM2 socket was first introduced in September 2012. The socket was primarily designed for AMD Accelerated Processing Units (APU), which is just a fancy way of saying that the CPU comes with an integrated GPU. AMD has always had great APUs that have an excellent value proposition, and these APUs are not an exception. The FM2 socket also supports AMD Athlon chips, which have always been budget-oriented chips that compete with Intel’s Pentium lineup.

Here is a quick rundown of the names in FM2 processors. They are very easy to follow and understand. You don’t need to spend hours researching to check the clock speed, number of cores and threads, the built-in graphics processor, etc. 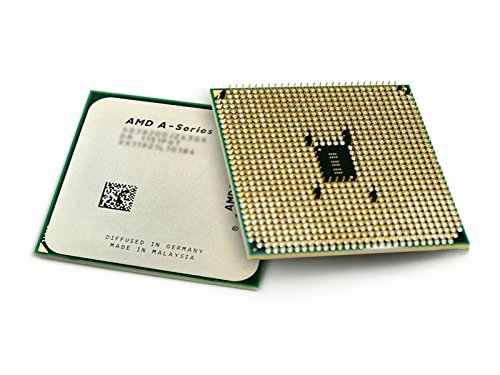 APUs are more oriented towards people who do not need a GPU, but this processor is the very powerful Radeon HD8670D processor that allows it for decent performance even in video games. This APU stands out especially in photo and video editing. It has a lot of processing power and always comes out on top of any FM2 processor. It is also great for multitasking and general computing tasks.

The only downside of this APU is the price. It launched at $149, which was up from the $129 at which the A10-5800K was released. It is also very difficult to find, but if you do, you are lucky. The A10-6800K is an amazing APU overall that can serve you well for whatever you want to do. And it also comes with a very nice stock cooler that can keep the temps under control.

It does not matter what you do on your computer, this APU will deliver. If you have an old FM2 APU that you want to replace with something more powerful, this is the best FM2 processor, provided that you can find it. 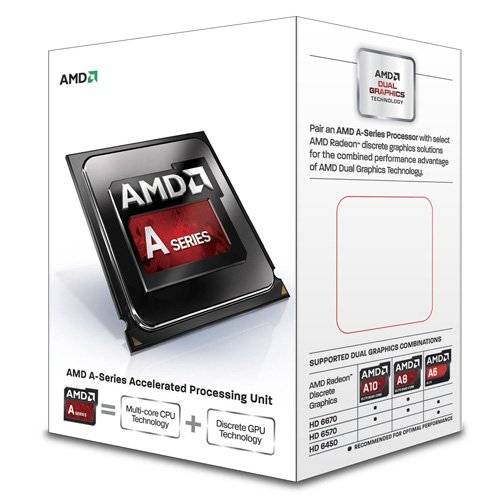 The A8-6500 is another APU that offers amazing value. They are trouble-free and offer decent performance. It launched in 2013, just like the A10-6800K, but the price at introduction was $112. If you do not need the extra computing power that the A10-6800K offers with its much faster cores, the A8-6500 is a great option. Its TDP is only 65W, making it much easier to cool as well. It has AMD Turbo Core 3.0 technology that allows the processor to automatically change its clock speed.

It has a base clock of 3.5 GHz, but it can turbo up to 4.1 GHz. The clock speed is dynamic, so it changes based on your usage. It also has Dual Graphics support, which means that your APU and GPU will work together to get you the best performance possible. This means that the A8-6500 is a good choice even if you plan to buy a dedicated graphics card.

With its Radeon HD8570D GPU, it can play high definition videos and do some very light gaming as well. You can play older titles without any trouble on this APU, but modern titles will need something with more power. All in all, this APU offers amazing value for the price. It is great for web browsing, watching movies, and some lightweight photo and video editing as well. Its low-profile cooler will not be an issue even in very small PC builds. 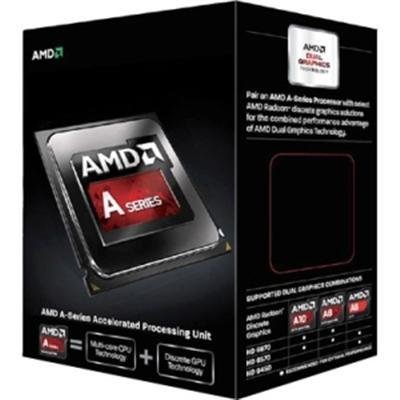 Here is a processor that has some excellent value for people who do not care that much about video games but still like to play them sometimes. It is also suitable for some light video and photo editing, but it is not the best choice. This APU is great for people who need to build a dirt-cheap computer and do not want to buy a dedicated graphics card.

With only two cores and two threads, it is not very good at multitasking and multithreaded workloads. But at least the cores are decently fast. The base clock is 3.9 GHz and it boosts to 4.1 GHz. The launch price was only $71, but it can be found for much cheaper nowadays. Its popularity means good availability as well. If you need a cheap computer for emailing, surfing, research, and other tasks, this APU is a good choice.

The A6-6400K features the Radeon HD8470D which is suitable for HD videos and even some gaming. In Battlefield 4, the APU can achieve an average of 25 frames per second on low settings, which is just a testament to how good these old APUs are. Something older like The Witcher (the first one) can be played without any issues on this APU.

An interesting thing to note is that it has a TDP of 65W, just like the A8-6500, despite having two fewer cores. It is not a lot of power, but it is baffling nonetheless. Also, the APU has an L2 cache of only 1 MB, which severely impacts the performance of the APU. 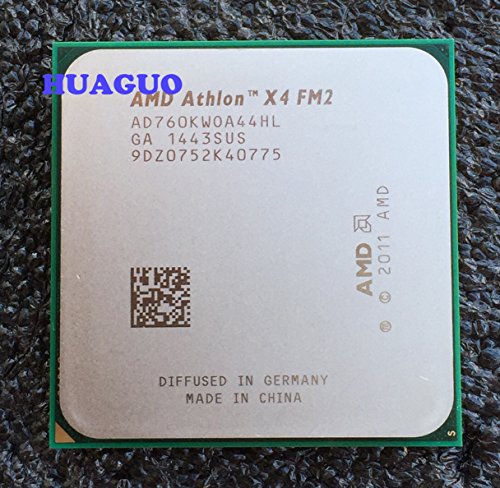 Here we finally see an Athlon CPU that does not have an integrated GPU. This is the best choice for gamers because most gamers have or plan to buy a dedicated graphics card already. Nonetheless, you should look at the FM3 and FM3+ platform if you are looking for a cheap gaming processor, but this one is all right for some very light gaming.

You will get performance that is very close to the A10-6800K but it will be much cheaper to get the Athlon X4-760K. It is also easy to overclock this CPU to push it to its limits. With a GTX 980 Ti and 16GB of RAM, you can see an average of 82 FPS in Fortnite when the CPU is overclocked to 4.6 GHz. But even the base frequency of 3.8 GHz and 4.1 GHz are all right already.

The TDP is 100W for this CPU, which means that you need a good cooler if you want to do any overclocking. The stock cooler is already struggling to keep this CPU cool, but if you do not overclock, you will be fine with it. Unfortunately, it has only 1 MB of L2 cache, which means that its performance is somewhat hindered because of that.  All in all, it is the best CPU to get if you have a dedicated graphics card.

Are FM2 processors worth it?

If you are on a very tight budget and need a computer, FM2 processors can still be an all right choice, even in 2020. They are also a good choice for people who are not tech-oriented. You can build an FM2-based computer and leave it at your parents’ house. They are also very easy and cheap to get, especially on the used market. You can also upgrade the system later with a dedicated graphics card that will make use of the Dual Graphics technology

Which Model Should I Buy?

If you do not plan to buy a dedicated graphics card, an APU is the best choice. The best FM2 processor is the one that fits into your budget, but be mindful that paying slightly more will bring you much better performance. Try to avoid the 2-core (A6 and A4) APUs because most programs nowadays can take advantage of 4 cores and 4 threads. Plus, if you plan to buy a dedicated graphics card with support for Dual Graphics, you will have slightly better performance.
If you are a gamer on a tight budget, an Athlon CPU will be a better choice. These CPUs are generally faster and cheaper than the APUs. You can ignore the Dual Graphics technology here and go with whichever graphics card you want. They are an all right choice for lightweight gaming but remember that you need a dedicated graphics card. You can do some video and photo editing on these as well.

What Is Dual Graphics Technology?

Dual Graphics technology is AMD’s proprietary technology that allows for the APU’s graphics card processor and your dedicated AMD graphics card to work together. You can expect a slight performance boost with this, but it is not revolutionary.

For A6-6xxx (Richland) APUs, the HD 6450 is the recommended graphics card. For A8-6xxxx as well as the A10-6xxxx, the HD 6570 and HD 6670 are the best choices. You can check on the manufacturer’s website for the best combinations and general compatibility.

The FM2 platform is pretty diverse. There is something for everyone, from gamers to business people. We see that the theme of it is decent computing power at a low price. If you are on a tight budget and need a basic computer, FM2 processors are an all right choice.